Knowing when and how to reveal your baggage is vital if you want to have a strong and lasting relationship with the opposite sex. We all have baggage. For some people it’s a small little carry-on, but for others, it’s a 200 lb steamer trunk. Maybe you got a quickie marriage and annulment in Vegas. Perhaps you have a felony. It could be that you can’t have children.

Reveal Your Baggage: When And How To Say It Matters

As we all have a past and possible issues, struggling with when to bring it up in a relationship is always a stressful decision. They’re definitely not good conversation starters, I’ll tell you that! If it’s done too soon, the person may ghost. If it is brought up too late, the other person may feel deceived. Even if you know the right time to bring it up, you may struggle with how to bring it up. Since it’s something we all have to wrestle with at some point, here are some tips to (hopefully) make it easier.

While you may be excited to finally be going out on a date again after your last horrible breakup, it’s definitely not the time to use your date as a stand-in therapist. The first date is supposed to be light and airy. You can talk about all of the other stuff in future dates. “A guy I was with on a first date mentioned he went down on his best guy friend, but it was beautiful and he didn’t regret it. But he wasn’t gay, of course.” – Amber G. The sentiment is fine. Saying it on a first date is not.

The More Serious it is, the Sooner it Should Be Brought Up 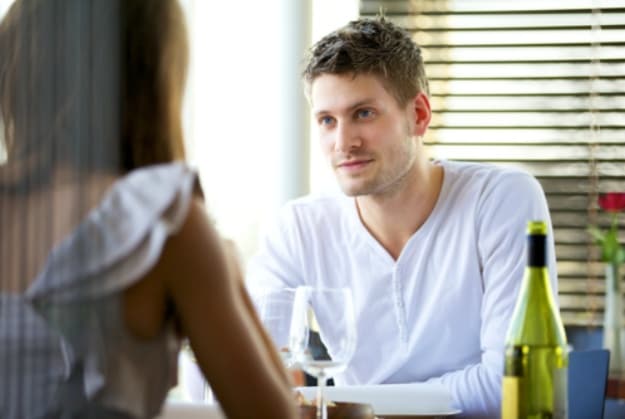 If you once had a miscarriage with a former boyfriend, that’s something that you can hold off talking about until you are deeper into your relationship. However, if it’s something that’s immediately obvious or that will impact the relationship strongly, it’s better to talk about it sooner. Telling him you have a child can wait until date two or three. But sometimes, if you can’t hide baggage, it’s better to confront it sooner.

“I had a girl tell me she had MS [multiple sclerosis]… but I appreciated her letting me know. It didn’t feel like an overshare the way she shared it. She said she had health issues, and that she was open about them. She wanted me to know that she was taking care of it. Overall, she was confident when sharing the info.” – Sarah J.

Be Conscious of How Much Weight You Put On it

Deciding how to tell can sometimes be the most difficult decision. Just understand that the amount of weight you put on it communicates how much of an issue it is for you. I had a client that would, very seriously, sit a girl that he just started dating down and tell her that he had Crohn’s disease. Now, Crohn’s disease is not nothing, but he was putting so much weight on it that it would freak out the women. If you are able to mention it — almost in passing — it helps to lessen the impact. For example, if she mentions going to a ball game say, “Sounds fun! I just have to make sure we get seats near the restroom so my Crohn’s disease won’t spoil the fun!”

Christian Cage shows a video of a game show about baggage:

Regardless of what baggage you may have, sharing it doesn’t have to be scary — for you or your partner. Keep these tricks in mind when thinking about how to reveal your baggage, and you should be fine!